Posted on July 8, 2013 by AmericanValuesRestored

WRITER’S CAVEAT: This post has not been edited. No apologies are offered for missing or misplaced commas, excessive use of the words have, had, that, and excessive exclamation marks. Please ignore all after the first.

One day, Jerry came home with not only big tips but news. “I have Aids” he told me. Shortly thereafter, he was admitted to the hospital under the best of care. For ten days, I showed up after work and sat at Jerry’s hospital bed until the nurses kicked me out at 10:00. Jerry’s spirits were high, I told myself along the drive home, he’s managed to laugh it off I thought, he was even joking, but once he began radiation treatments he became highly irritable. There were many times he came home and headed straight for the bathroom to vomit. 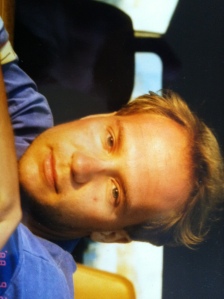 Jerry always was a little on edge.

At the time, AZT was the only poison available to kill that part of him he wanted gone but it was killing him as well. Because he kept the chemotherapy treatments a secret, I didn’t know to what extent he was suffering. He was receiving the best care available, and still nothing could stop this dis-ease that had turned him mean.

“You need to deal with your anger,” I told him “you need to read Louise Hay’s book, You Can Heal Your Life. She had cancer and was given six months to live. Twenty-seven years later, she’s still proving the doctors wrong.”

“You and your ‘healing’ ideas” Jerry said, thwarting me and my collection of magic crystals. One day he came home with a bouquet of flowers, the next day he was yielding a pitch fork – ready to attack me at any moment.

I maintained my modest studio in Koreatown while nurturing my relationships with Jerry and Ilona. When I wasn’t on Linda Flora Lane or at Jerry’s apartment, I occasionally went back to my own space in search of myself. We had been intimate, so of course I thought, I’m next. As if the Universe was reading my thoughts, a year later, I was diagnosed as HIV positive. After getting tested every six months for eleven years, whether I had been celibate or not, I was no longer negative against the virus that was killing my friend before my eyes. I need to make some preparations, I told myself before I sold (out) my house at a great loss.

“It’s your own fault” Mother told me later “you should never have slept around.” Mother had no clue whether I had slept with any girl at all after the three models she brought home for dinner, served wine to, then sent into my bedroom to keep them safe. They were indeed safe with me. Mother never wanted to know whether there was only one — or thousands of women – and men in my life. All she knew is I was wrong, and she was right.

“I was looking for love, and though your Home is lovely, I wasn’t finding love there,” I told her. Tema durch; case closed.

That fall, I signed a damned blessed contract with L.A.U.S.D. to teach, more than doubling my pittance of a salary and keeping me stuck in a cycle I couldn’t get out of; a commitment to poverty. For me, teaching was a dead end job with no end. It might have something to do with my instability and having jumped around since I first popped out of the womb.

The following month I moved into a duplex in Silver Lake with a view of the hills. For some reason, Jerry came over to visit. I think he was just nosey. He told me he was leaving the chaos of Los Angeles and moving to Northern California to live with a friend who was going to care for him.

“I didn’t think you had it in you” he told me in disbelief, “I didn’t think you would be able to get into a nice place, but in so many things, you’ve proved me wrong. I read Louise Hay’s book You Can Heal Your Life. I’m going to attend one of her Hay ride events. You were right all along, I need to deal with my anger.”

“Thanks” I said “I needed to hear that from you.” Now if he could just have validated my job – I mean my teaching career. I never saw or heard from Jerry again, but later I got in touch with his friend in Monterrey and learned Jerry had left us. I wanted so badly for him to be at peace here, but he couldn’t step over the river to my side of town and though his side of town had its attractions, I didn’t feel comfortable in a world where excess and beauty were the ultimate reasons for existence.

I wonder how much alimony Katharina ended up having to pay Whatzzisname (see Tribute to Jerry Schmidt Part I).

Now that Jerry is wherever he is, I hope he has found that peace I so badly wanted for him. He was a true friend, a fun person to play with, and he pulled me out of near poverty for the time he was able to. Beneath his unpolished mind lay what must have been a tormented soul, always joking with the most sympathetic of voices, yet in total denial of what was happening beneath

My point is this; for little more than a year, I enjoyed the distraction of the finer things in life while I continued to show up to teach in a career that was a commitment to poverty. As far as health goes, healing prayer and magic healing crystals have worked for me. HIV has been no more than a stresser, an inconvenience of living on medications.

Teaching, for me, was a dead end, which might have had something to do with the fact that I never followed the easy path. Every time I did, I was prompted to tread a new one, “and while you’re at it, cut down the weeds.” and cut down the weeds along the way” I was told.
I miss hearing my friend’s voice. Even when he was mad, it was better to hear him than not to hear him at all. I find my experience with Jerry worthy of prayer.